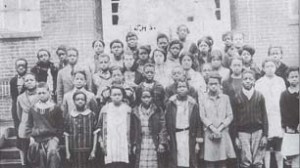 Jefferson School is not only a familiar landmark in the Starr Hill neighborhood of downtown Charlottesville, but it is also officially recognized by the United States Department of Interior, National Park Service as having historic significance and is therefore listed in the National Register of Historic 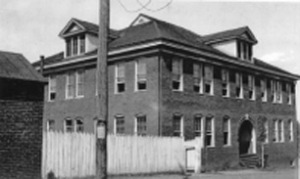 At the end of the Civil War, the New England Freedmen’s Aid Society sent a teacher, Anna Gardner, to Charlottesville to open a school for former slaves. She named the school, “Jefferson School” after the nation’s third president, Thomas Jefferson, whom she admired. In 1865, the first Jefferson School was a one-room school in the Delevan Hotel on West Main Street that had served as a hospital for wounded Confederate soldiers. In 1869, the school grew to three grades and moved to a building near the Charlottesville train station. And, in 1894, land at the corner of Fourth and Commerce Streets (now part of the school’s current parking lot), was transferred to the City for the construction of the Jefferson Colored Graded/Elementary School. It provided instruction through Grade 8 and served the African American community well until 1926.

Jefferson High School, completed in 1926, was one of only ten African American high schools in Virginia at that time.

The two schools, Jefferson Graded School and Jefferson High School, stood in the Starr Hill neighborhood on the western edge of Vinegar Hill, a predominantly African American neighborhood that contained residential, commercial and civic buildings that served as Charlottesville’s economic and social core for blacks during the first half of the 20th century. In the 1920s, Vinegar Hill was in its prime as an African American commercial and residential neighborhood.

As the demand and student population grew, as well as the African American community’s desire for pubic library services, the high school underwent its first expansion between 1938 and 1939. The expansion included an open air courtyard, additional classroom space and a library; all built through the use of Federal Public Works funds.

Jefferson School’s history parallels the development of public education in Virginia from its years of segregated school facilities through the tumultuous years of desegregation from 1954 to 1970.

In 1958, the Virginia Governor J. Lindsay Almond, Jr., acting on Massive Resistance legislation enacted by the legislature, took control of two previously all white schools in Charlottesville, Venable Elementary and Lane High School and closed them, all to avoid integration as ordered by the U.S. Supreme Court. Virginia was the first state and Charlottesville among the first Virginia communities in the nation to have any of its schools closed to avoid integration.

It was during this period that a large addition was built onto the north end of Jefferson School, as the student population had increased to 847 by the fall of 1958. This additional space included additional classrooms. In 1959 the expansion continued with Carver Recreation Center, a gymnasium, auditorium and athletic facilities. It was during this year that the Jefferson Colored Graded School was demolished.

As the fight continued to integrate schools in the Charlottesville community, and more African American students transferred to previously all-white schools during the early 1960s, enrollment at Jefferson School saw its first decline and other elementary and junior high school became overcrowded. And, ultimately in the 1965-66 school year, Jefferson School became a junior high school serving both African American and white students. In 1966-67, the school housed all 6th grade classes, again both African American and white, for two years allowing for the completion and expansion of junior high schools around the city, thus continuing city-wide integration. This decision demonstrated that the City of Charlottesville was agreeing to comply with the Civil Rights Act of 1964.

Jefferson School continued to function as a “swing school” from 1975 to 1992 for elementary schools that were undergoing renovations in the public school system. It also served at various times as a consolidated city-county health department, storage and office space for the school system as well as a citywide pre-school program.

The legacy of Jefferson School is a remarkable one. It has served for over 125 years as the cornerstone for African American citizens of Charlottesville and surrounding Albemarle County, providing a venue and focal point for their emergence as a dynamic and vital part of the community’s social history during the 20th century. It represents a spirit of tenacity and dedication to the highest national ideals of equality and fairness. And today, it marks the coming together of the African American and white communities of Charlottesville to plan for the future use of this important structure that is a testament to the durability of the human spirit.

Resources
The Reflector, An African-American newspaper depicting African-American Life in Charlottesville, VA during the Jim Crow Era.
Site created by graduate and undergraduate students at the Virginia’s Curry School of Education.